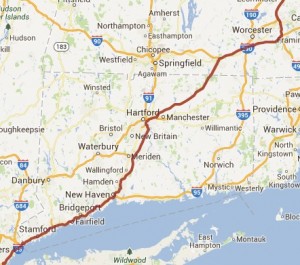 Let’s try a practical example. First, we start with a dataset. We’ll use this CSV with 50 coordinate pairs (lat,lon). If you want to play along, you can use Mark McClure’s Encoding Utility. McClure has a bunch of excellent resources on his website including encoded polyline libraries for a bunch of different languages. If we convert the whole dataset, we get:

One thing to be careful about later on is that there are frequently backslashes in encoded polylines. Depending on what language you’re using, or how you’re storing the encoded polyline, you may have to escape the escape characters.

To find the other segments, just keep plugging in the pairs. If you don’t get it, don’t fret too much, it took me a few weeks and a couple of software engineers to fully wrap my head around this. Feel free to leave questions in the comments and I’ll be sure to get back to you.

P.S. Another thing to be cautious of is line endings. When I was playing with some data early on, I exported a CSV from Excel on my Mac which defaults to CR line endings. This was seriously screwing up the algorithm and my points were literally all over the map. To correct this, just open up the CSV in TextWrangler and save as with Unix line endings (LF).